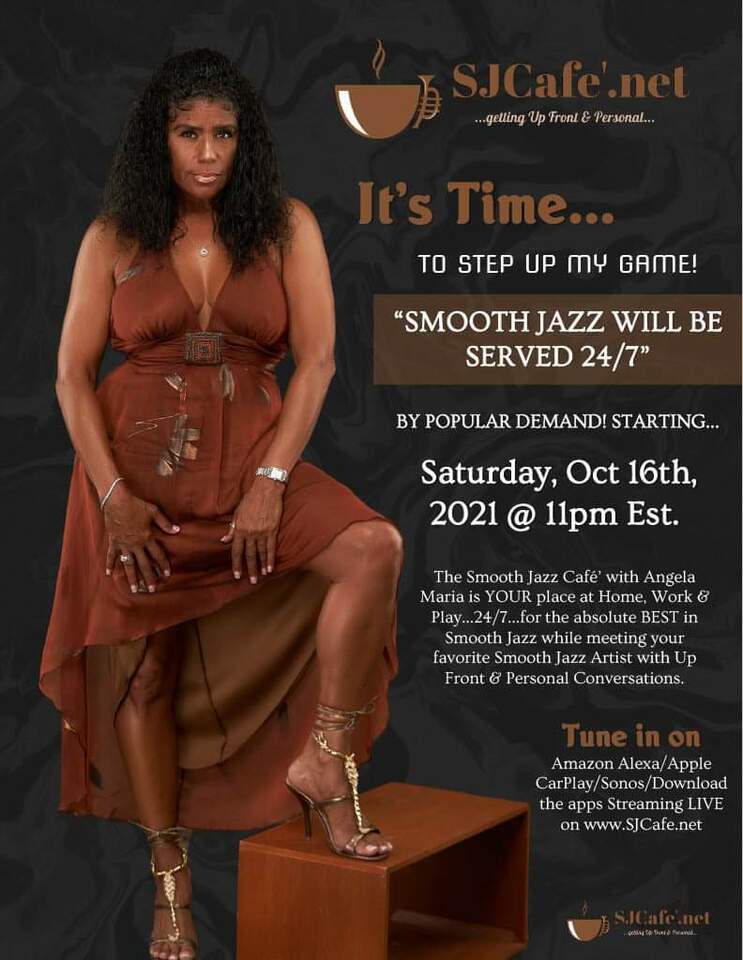 is your place for the absolute BEST in Smooth Jazz while meeting your favourite artist with Up Front & Personal Conversation!

See also 'EVENTS' for further information and click 'READ ON' for exact time in your State or country !

Angela Maria is a Chicago Native affectionately known as "Angie or Ang" was introduced to Jazz at 10 yrs. old.

As a child, she grew up on Wes Montgomery, Nancy Wilson, Nat King Cole, Sarah Vaughn and Gene "Jug" Ammons. Her parents would play Jazz throughout our home. Although Angela listened to all genres of music throughout her childhood and teenage years - there was something about "Jazz" that captured her attention.

At 13 yrs. old, she vividly remember rushing to Metro Music to buy Grover Washington Jr's "Paradise"album. She must have played the ridges off that album! The passion and colors she felt from Grover playing the Sax literally blew her away!

Angela received her BA in Communications from Columbia College.

Blessed with given the opportunity to start her Radio Career with Satellite Music Network, one of the first satellite delivered networks then owned by ABC  with 24 hour Syndicated Stations having 32 affiliates. Program Director, Glenn Cosby hired Angela Maria for "The Touch" which was an Urban formatted station.

Glenn took Angela Maria under his wing and taught her everything about the station; Production, Operating a Massive Soundboard, Reading a Rotation Clock, Opening/Closing the mic, etc. To actually start her Radio Career with an ABC owned/operated Network was an experience of a lifetime!

Returning to Chicago, Angela Maria joined WJPC 106.3 FM - after receiving a call from Program Director, Al Greer to host over nights. WJPC was an Urban/Old School/Steppers formatted station. Under Al's programming the station was a major contender in Chicago Radio for Stepper's Music. Al taught her the importance of song placement regarding programming music.

As fate would have it "Jazz" would come back to Angela... Her experience, personality and work ethic caught the attention of Mr. Charles R. Sherrell II, owner of WBEE "Classic Jazz" Radio Station. She hosted middays on WBEE playing the likes of Sarah Vaughn, Nancy Wilson, and Duke Ellington. WBEE personified Jazz in Chicago Radio. This was a launching pad for her to identify the various styles of Jazz music. After a 45 year history in playing Jazz the station was sold.

Angela became a licensed Real Estate Broker in Illinois, working in the business for 23 years while achieving licenses in Georgia & Florida. Although there was Excitement & Freedom in assisting clients coupled with the lifestyle achieved through Real Estate - something was missing...

With much prayer, deliberation and planning Angela relocated to Atlanta, GA after sending "Air Checks" to a coupled of stations. Receiving offers from both stations, Angela joined "JazzBeatsRadio"  to host the drive time slot. JazzBeatsRadio provided the opportunity to have TOTAL control regarding; Producing, Programming, Scheduling, Selecting Artists for Interviews and the over-all concept of the show.

Realizing it was time to take things to the Next Level ~ Angela is the CEO/Operations Manager/Host of the "SmoothJazzCafewithAngelaMaria.com” and operating her Smooth Jazz Show/Podcast that can be heard worldwide. Music is a universal language that creates one common bond. Her Relentless Faith & Drive has brought a Vision into a Reality.